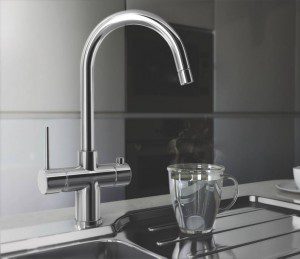 Carron Phoenix has entered the growing boiling water tap market with the launch of its new Seraphina model in the universally popular swan neck style in a chrome finish. The tap was launched in May as part of the company’s newly updated and repositioned Elite Range of sinks, taps and waste disposal products.

Seraphina utilises 3-in-1 technology allowing  hot, cold and boiling water at 100C to be dispensed from the single tap, giving the benefits of user convenience and keeping the sink space neater with just a single appliance. The tap features a safety button on a twist-and-turn control to prevent accidental boiling water activation.

Unlike many models, Seraphina has the benefit of incorporating a water conditioning filter in the boiling water unit, which improves the taste of the boiling water by reducing chlorine and limescale. It also protects the tank against sediment build-up which ensures optimum performance and longevity.

Replacement filters are easy to order and self-fit.

The Seraphina operates from a hot water tank that is slim enough to fit neatly underneath the base unit behind a standard 150mm cabinet plinth, helping to save precious space in kitchen cupboards which is a benefit over many other models. The Seraphina can be fitted new or retrospectively and requires a single standard-sized 35mm tap hole.

“Boiling water taps represent a rapid growth area for taps in the future and a big opportunity for retailers as an added-value sale. Our retailer base has been asking for a Carron branded model and we believe the Seraphina can compete with the best on the market as it combines all the latest technology, competitive pricing and a five year guarantee.”