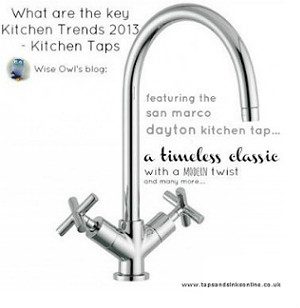 I have been following many articles / blogs on Kitchen Trends 2013 that have been published since early December 2012 with a view to seeing what it will mean for Kitchen Taps.

I have divided Kitchen Designs into three broad categories with a selection of two Kitchen Taps for each one:

In essence Kitchen Trends 2013 predictions are as follows:

♥ More ‘modern’ style kitchens,
♥ Use of more concealed appliances and hobs are more ‘professional’ in emphasis
♥ Greater use of islands as the dining and kitchen space is combined
♥ More pared back look for traditional kitchens.
♥ More emphasis on coloured glass / metallics
♥ Lighting is even bigger!
♥ Colour wise it seems to be veering towards more neutral greys / whites and accessorizing through splashes of colour
♥ Chinoserie (chinese – esq!) seems to be creeping in as well – but not your grandmothers willow patterns… this is more geometrical in pattern!

Traditional styles might be pared back a little and less ornate. Concealed appliances give a more sleek and uncluttered feel to any space. But the current use of ornate chandeliers in a contemporary setting (fabulous look) tells me that essentially even ‘traditional’ is still trending. 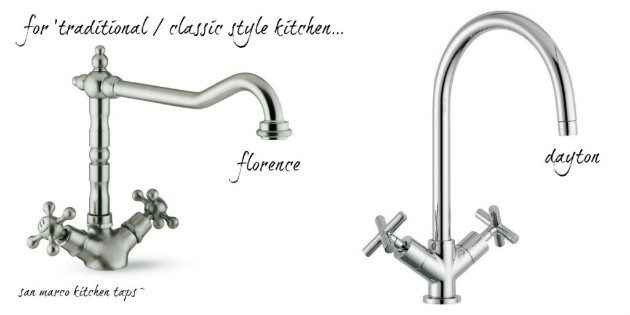 Florence and Dayton at www.tapsandsinksonline.co.uk

If you want to root your kitchen firmly in the traditional style then a Kitchen Tap like the San Marco Florence Kitchen Tap with its ornate spout would be perfect. It looks fabulous in the brushed silver (pewter) finish that also takes a bow to the current trend of metallics.

As one of the Key Kitchen Trends 2013 is a move towards ‘modern’ style, then the San Marco Dayton Kitchen Tap would be the perfect choice. Its design of cross haired handles and swan neck spout is classical, but the clean cut lines of the handles takes it from classic to contemporary. 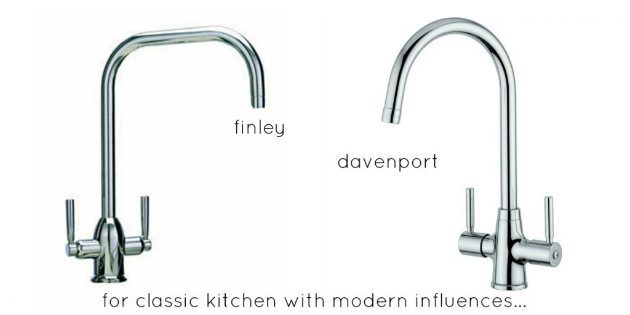 Finley and Davenport at www.tapsandsinksonline.co.uk

One of my favourite Kitchen Mixer Taps by San Marco is the Finley Kitchen Tap. I don’t think the images do it justice at all and I like it so much that it’s the Kitchen Tap that I chose for my own kitchen Its classic enough in style with its two levers but its square spout is a nice variation on the traditional swan neck spout. It has rounded curves so it’s not ‘so’ modern that it would seem out of place alongside more classic features in your kitchen. Yet it looks equally at home in a very contemporary setting.

If you don’t like the square spout then the San Marco Davenport Kitchen Tap is a fitting, elegant alternative. 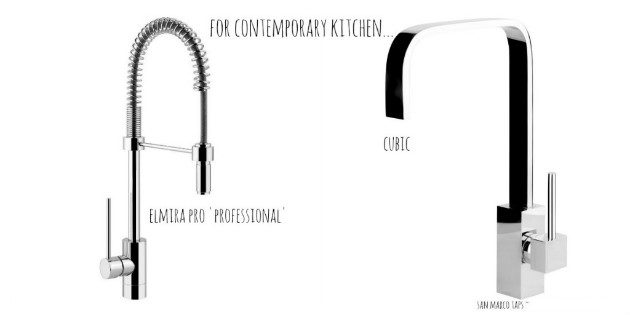 Elmira Pro and Cubic at www.tapsandsinksonline.co.uk

This was probably the hardest category to choose for! There are so many Contemporary and Designer Kitchen Taps out there right now that I was spoilt for choice. In the end I selected two completely different taps to show the variety of choice available. The first is the San Marco Elmira Pro ‘Professional’ Kitchen Tap and I picked it because one kitchen trend for 2013 is that appliances are becoming more ‘professional’ in design. See my review of this kitchen Tap.

The San Marco Cubic Designer Kitchen Taps is a good example of a Designer Kitchen Tap at an affordable price. Its sharp design is in contrast to the ‘normal’ cylindrical kitchen taps and its sleek design inspires the elegance of minimalism that is essential in a contemporary kitchen.

In Summary it seems as if there is something for everyone’s taste and budget in the Kitchen Trends 2013. The only pre-requisite that I always insist on in following any Trend is that YOU have to like it!

By the way, the in-colour this year is Green (last year it was Tango / Orange) and it will be hard to escape the ‘current’ colour, as by osmosis it will seep into a lot of accessories on display.

If you want more examples of kitchen images:

All taps featured here are by San Marco Taps (designed and manufactured in Italy) and are for sale on Our Online Store. We have been supplying San Marco Kitchen Taps for over 20 years and in addition to stocking all Spare Parts our technical team can trouble shoot nearly all Kitchen Tap problems and you can contact them at sales@tapsandsinksonline.co.uk