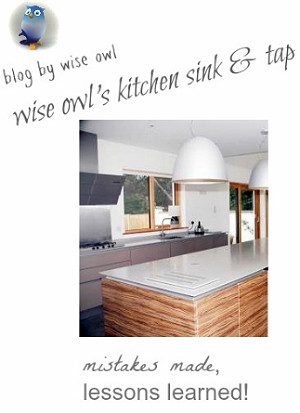 I am often asked what kitchen sink and tap did I put into my own kitchen, and I blush with how many kitchen layout mistakes and last minute changes we had to make to those two very items…

Initially we had just 3 requirements: 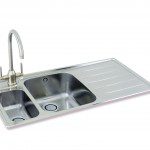 The Carron Phoenix Isis 155 Stainless Steel Kitchen Sink gave me the option of the half bowl situated away from the drainer (which is a good option if you are using the half (second) bowl for a food waste disposal unit, but I was willing to sacrifice that ‘requirement’ when I saw the Vela 1.5 Bowl instead.

They are quite similar in style but the Vela has a ‘heavier’ stainless steel look to it and would be more ‘matt’ in finish than the Isis which is more ‘polished’.  The Vela looks beautiful with any brushed steel tap.  and has two good sized bowls wide and deep enough for all our (my ?!) washing up needs! (It is 1025mm in length and 510mm in width).

But a last minute addition of 2 larger windows on the back wall affected the ultimate layout of the kitchen appliances.

The new space for the sink was not long enough to comfortably accommodate a large bowl, a small bowl sink and drainer. 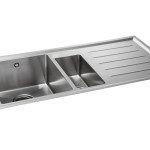 Luckily Carron Phoenix do a really contemporary square shaped undermount sink in two ranges, Deca and Tetra (in fact these ranges can be ‘inset’ as well).

The Deca 1.5 Bowl Kitchen Sink, being an undermount sink, immediately solved the problem of lack of space.

Only 590mm in length and 460mm in width,  but in fact the Deca large bowl is the same size as the Vela large bowl and the half bowl in the Deca is actually slightly bigger.

After all of that, The Kitchen Tap…

Just as with our kitchen sink, we had just two requirements for our Kitchen Tap:

A square spout with a brush nickel finish really appealed to me. The San Marco Finley Kitchen Tap ticked all the boxes except one – it wasn’t a filter tap. Our own Stores saved the day by making me my very own Kitchen Filter Tap taking the the Carron Phoenix Dante Filter Tap and incorporating the Finley spout! Everyone happy – or at least we were until the Corian Man came to fit the worktop…

The space was too small for the filter tap to work!

How a 2 lever filter tap works? The lever on the cold side works both for the mains (by pulling the lever towards you) and for the filter (by pushing the lever away from you) .

It was only when the hole was drilled out that we realised we had just one tiny (but huge) problem…there was a wall and window sill in the way. It was not his fault but ours.

Frustrated and resigning ourselves to having to use a different tap because the lever was just too big for too small a space, a very nice Italian gentleman Fabrizio in San Marco Taps came to our rescue and He made a baby lever that can go backwards completely. No one even seems to notice the difference in length – maybe they think it’s a design feature.  We can supply this shortened lever if you dont have enough clearance for your cold filter lever to be fully pushed back (we would recommend clearance of 100mm).

What did I learn from this?

Now we advise all customers that are looking at 2 lever filter taps e.g. Carron Phoenix Dante Filter Kitchen Tap (which is a lovely filter tap) 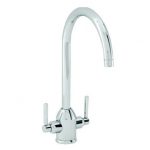 to make sure that you have enough space (at least 100mm space behind your tap for the lever to be pushed back as far as it should go. 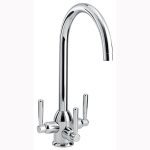 In Taps and Sinks Online we are used to working out different options for customers based on their budgets and the space that they have available to work within. Usually we find a solution that they are happy with. It is never about trying to sell the most expensive sink or tap.

At the end of the day it’s about offering our customer the best service.

If you have any problem or design challenge that we can help with, we would love to hear from you. Just contact us at sales@tapsandsinksonline.co.uk