This is a common issue and for the purposes of this blog post we are assuming that we have shipped your order correctly .

Remove the valve and check the seal e.g. red for hot, blue for cold.  Below image shows the notch that identifies a hot valve / cold valve where the seal underneath is white. 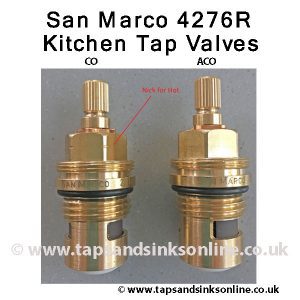 Assuming you received the correct valve, here is how you fix this issue.

Close the valve i.e. turn it so that the ceramic disks close as much as possible.

Re-insert the valve following our 7 easy step guide in reverse.

Place the lever back onto the Tap upright i.e .closed position.

and all should be ok.

Bridge mixer tap – where levers are extended outwards when valves are turned off.

Usually your lever is working incorrectly becausse you have fitted the correct valve open when it should have been fitted closed as per above example in the Two Lever Tap OR you have ordered the wrong valve because a bridge lever tap works in the opposite direction from what you might assume if you are not used to dealing with valves.

Close the valve i.e. turn it so that the ceramic disks close as much as possible.

Re-insert the valve following our 7 easy step guide in reverse.

Place the lever back onto the Tap upright i.e .closed position.

and all should be ok.
This does not fix the issue : Have you actually ordered the correct valve? 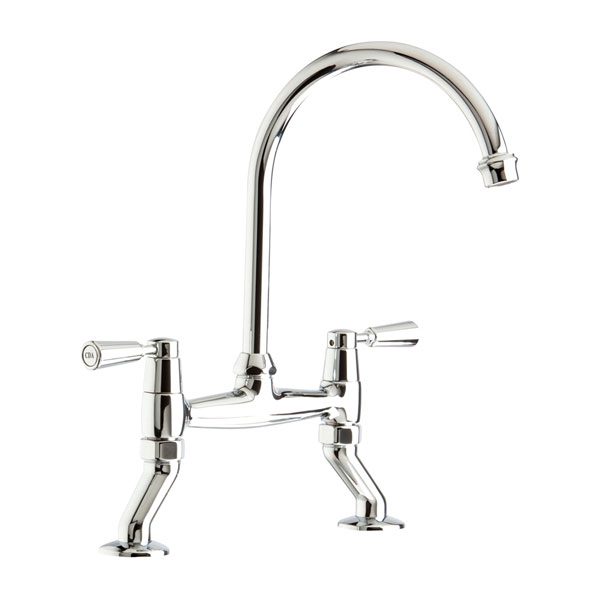 This image above shows a tap in the turned off position.

(This is the opposite to what you would expect, but horizontal levers open the opposite way to standard two lever taps).

Here is some further detail / explanation:

Provided your Tap has been plumbed correctly i.e. that the levers are extended horizontally when Tap in OFF position (and the Hot feed is on the left and the Cold feed on the right), then please note the following:

The norm in Industry when referring to Cold or Hot Valves usually means that a Clockwise Opening Valve is known as a Hot Valve (CO) and an Anti-clockwise (ACO) Valve is known as a Cold Valve. However, in a Bridge Lever Tap where the Levers operate Horizontally rather than Vertically, the opposite applies (provided your Tap is plumbed as described above). This means that you would need our 'Hot CO' Valve for the Cold Feed and a 'COLD ACO' for the Hot Water Feed. If in doubt, remove your own valves first and order the same i.e if your own Valve has a blue seal, order the Cold ACO Valve. If your own Valve has a red seal, order the Hot CO Valve. If your own Valves have white seals, then the COLD ACO valve will have NO nick on the nut, whereas the HOT CO valve will have a nick on each side of the 6 sided nut below the splines. If still in doubt, order a Pair. . Please see here an example of a Bridge Lever Tap and note that the Hot Valve is on the Cold Side and the Cold Valve is on the Hot Side. 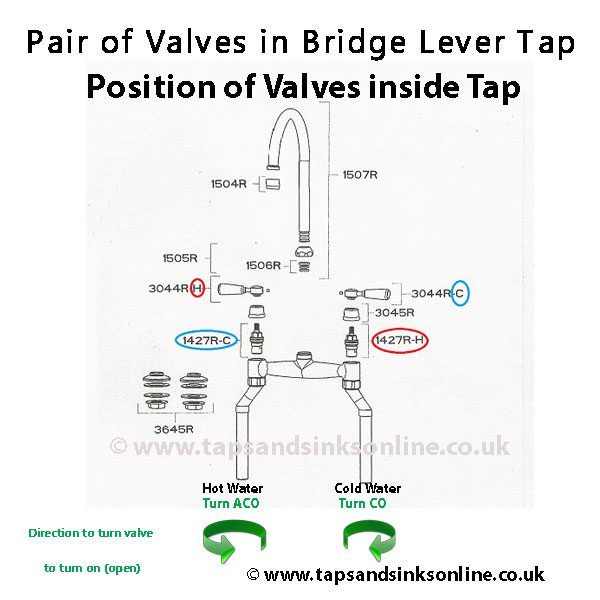 Posted in: Helpful Tips, How to...., Plumbing Guides