See down below under ‘Product Description‘ for details / images of the 5 plug variations (from Variation 1 to Variation 5). Then select here below the plug variation that you wish to purchase. 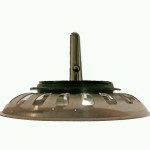 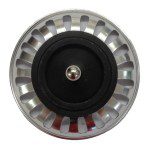 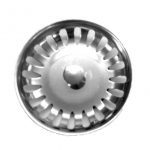 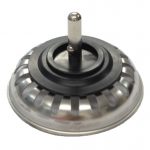 Colour: Available in Chrome only. 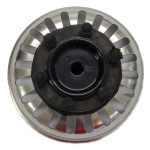 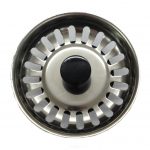 PLEASE NOTE THAT YOU CANNOT CHANGE YOUR VARIATION 4 POP UP PLUG FOR ANOTHER PLUG UNLESS YOU ALSO CHANGE THE CUP THAT THE PLUG GOES INTO E.G. VARIATION 2 CUP AND PLUG SET

Carron Phoenix has only one Pop Up Plug available – this one, V4.  The diameter of the Stainless Steel Disc on Top is 73mm. Diameter of plug is 80mm. Pin Length is 47mm. Overall height when opned is 87mm. If your existing plug pops up and you have a Carron Phoenix Sink and it looks like V4 in the picture, then this is the plug you need to purchase as a replacement unless you also change the Cup underneath as well. 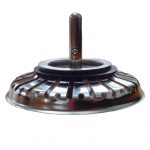 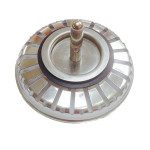 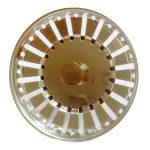 V5 has been discontinued but V1 Will also fit so if you order V5 you will receive V1.

Belfast 110 Plug
If you have a Belfast 110 Sink (that comes with weir overflow and small sink hole outlet) then this currently only comes as part of the Belfast 110 Waste and Plumbing Kit which you can find here.

Disclaimer: We have no way of knowing whether or not the waste and plumbing kit used was the original waste and plumbing kit supplied by Carron Phoenix. That is why it is so important to check the measurements that are supplied with each plug and also compare pictures. While we offer full refunds, we will not offer a refund for the postage cost of returning a plug should it not fit.

Parts might be modified by the manufacturers as part of their continual improvements. We cannot always guarantee that a part will fit an older version of a product. All spare parts that do not fit can be returned for a refund excluding shipping costs.

We ship from Ireland. DPD have notified us that they are experiencing shipping delays in GB due to Brexit (Customs). They currently advise us that these delays are temporary. However, as per the Large Popup notice on our website that is there until you Dismiss it, you should allow a minimum of 1-2 weeks delays for your order to be cleared by customs. This backlog is due to the volume of goods now going to /from GB that have to go through Customs from January 1, 2021 due to Brexit. It is outside of our control. (There will be no extra or hidden charges with your order). For very small items such as grub screws and O Ring Kits, we will post (again allow some delays) and refund the excess shipping charge .

We intend that Brexit will have no financial impact on our customers.

Spares Parts: For Mainland GB / N.I and ROI, Minimum of £4.50 to maximum of £6.00 with DPD 2-3 working days (excluding the impact of Covid-19/Brexit Transition). Click here for more detailed information about all Shipping & Returns.

We apologise for any inconvenience but we are currently only shipping to England, Scotland, Wales, NI and ROI, excluding any Isles.

We are currently not shipping to Channel Islands, Isle of Man or any Isles.

This site uses Akismet to reduce spam. Learn how your comment data is processed.

This website uses cookies to improve your experience while you navigate through the website. Out of these, the cookies that are categorized as necessary are stored on your browser as they are essential for the working of basic functionalities of the website. We also use third-party cookies that help us analyze and understand how you use this website. These cookies will be stored in your browser only with your consent. You also have the option to opt-out of these cookies. But opting out of some of these cookies may affect your browsing experience.
Necessary Always Enabled

Any cookies that may not be particularly necessary for the website to function and is used specifically to collect user personal data via analytics, ads, other embedded contents are termed as non-necessary cookies. It is mandatory to procure user consent prior to running these cookies on your website.

Our store is open!

For GB Customers only: Shipping delays have improved from the intial Post-Brexit phase. However, until we are further into January, we cannot guarantee our usual 2-3 days shipping times. We are still advising to allow 2 weeks approx for your order to arrive once dispatched as we don’t want to promise anything that we cannot deliver on. There will be no additional or hidden charges on delivery to GB post Brexit. ROI & NI Customers: shipping as normal.
Please email sales@tapsandsinksonline.co.uk if any queries as some staff working off-site. Take Care. Be Safe.