John Lewis has chosen Abode to supply the Group with bathroom taps and showers for their new in-store bathroom departments.

Abode already have a very good working relationship with John Lewis and have been a major supplier of a full range of kitchen brassware for the past six years. 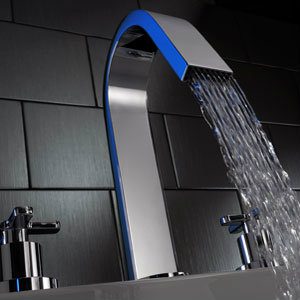 Abode already have a very good working relationship with John Lewis and have been a major supplier of a full range of kitchen brassware for the past six years.

Darren Holliday, Director of Abode comments: “We are delighted that Abode has been chosen to supply John Lewis with creatively designed bathroom taps and showers.

“Our design team have won many awards for their creations, however, it’s not always design that wins the day – a company has to be able to deliver on time, every time, to satisfy customer demands.

“Since its inception 10 years ago Abode has worked hard to satisfy its customers and has a very good reputation in the kitchen and bathroom industry.”

The new bathroom taps that were launched at KBB in March, such as the thermostatic bath fillers and showers, low pressure bath mixers and extra thin showerheads will soon be appearing in the new bathroom departments in John Lewis stores, alongside the full range of basin and bath taps and showers.

We are delighted in Taps and Sinks Online about this great news as we stock Abode Bathroom Taps and Showers. We are in the process of putting all the Abode Bathroom products up on our site, but in the meantime, if there is any Bathroom Tap and / or Shower item that you want to buy, just email us sales@tapsandsinksonline.co.uk and we will give you price and estimated delivery date. You can download the complete Bathroom brochure here.